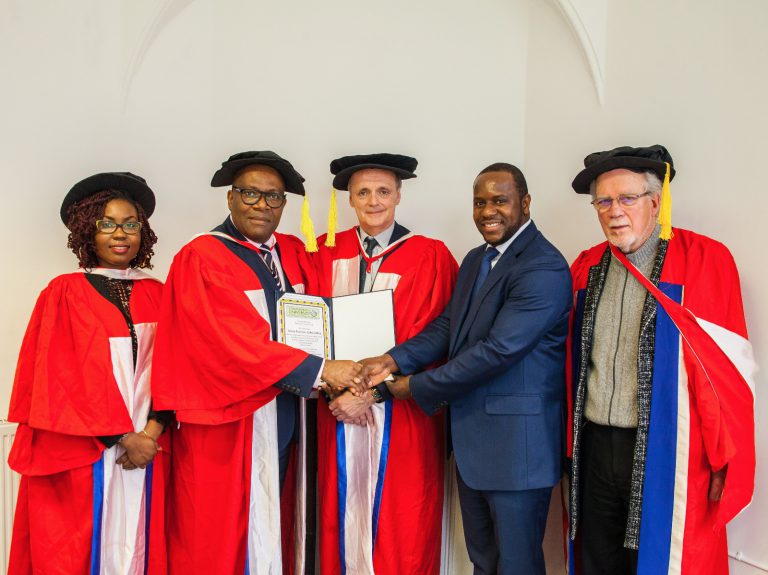 Nigeria’s famous humanitarian and child rights group, Jose Foundation was recently honoured in the United Kingdom for its oasis of compassion and caring for children and the vulnerable against sexual exploitation. Pembi David-Stephen, reports on highlights of the event.

It campaigned against child sexual exploitation vigorously all year round in Nigeria, in several African states, the United Kingdom, United States and other countries across the globe to put a stop to the heinous crime against children and the most vulnerable in the society, Nigerian humanitarian group, Jose Foundation caught the attention of the world as it walks through perfidious trenches for the safety of children.

Jose Foundation, a non governmental organisation set up in 2003 in Abuja by Prince Martins Abhulimhen, the humanitarian outfit has endured 15 years of torturous campaign to protect children from sexual exploitation whether at home, in schools, sports centres, and in the camps of the Internally Displaced Persons (IDP) camps in the north eastern parts of Nigeria.

While it campaigned in Nigeria using the media to advocate for child rights and urging actions from constituted authorities to fight child sexual abuse that has become a daily occurrence in the country, the Foundation drew international attention to the plight of the people of the northeast by taken it campaign to the United Kingdom’s House of Lords.

At the British parliament, the humanitarian group sought for international response to the situation of the children being allegedly abused by people who are supposed to be protecting them against the violence of insurgency.

Not relenting in its campaign for a better future for children in Nigeria and Africa, it took the international community by storm by taking its crusade to the door steps of the International Criminal Court (ICC), United Nations Children’s Fund (UNICEF), the English national football team, well know global figures including ex presidents and celebrities.

On the local front, the campaign to increase awareness among Nigerians has been sustained through aggressive media presence, intimating stakeholders of what steps to take to guide children against the evil hands of abusers.

It on this premise that the London Graduate School, the appointed tuition provider and administrator of the Commonwealth University in London on the occasion of its 2018 graduation and convocation ceremony which took place on March 15, 2018 at the London Graduate School campus decided to honour the Nigerian non governmental organisation and its founder, Prince Martins Abhulimhen with the Doctor of Humanities (Honoris Causa) in recognition for his service, selflessness and other outstanding contributions to humanity.

Reading the recipient’s citation to the large audience that gathered at the elaborate event in London, the chancellor, Commonwealth University London, Prof Michael Addison, described the Nigerian as “highly esteemed philanthropist”.

“The generosity of the Jose Foundation supports innovative, impactful and lasting initiatives in low-income countries that promote women’s economic and social development. The enterprise provides access to essential services to encourage responsible management of diminishing natural resources; to deliver humanitarian assistance to children and their families in the aftermath of natural disasters.

“In parallel, the Jose Foundation launched a global awareness campaign to draw attention to the growing evidence of child sexual abuse,” he said.

The chancellor concluded by telling the audience that, “Over the past decade, many needy and deprived individuals throughout Asia and the Far East have been enabled to rise from abject poverty and embrace life with new meaning.

“The chancellor and the Academic Council of the University consider it an honour and privilege to bestow on Prince Martins Abhulimhen the Doctor of Humanities (Honoris Causa) on this 15th day of March 2018.

Speaking to newsmen after receiving the award, Abhulimhen said, when he was a boy he asked for help from people and that he know what it means to be vulnerable in the society.

“Over the years, I tried to make myself useful in the best ways I could. But I had the feeling that it was not enough. It is essential to offer its warmth, like a blessing, to those who are hungry, confined or in need and prisoners of hardship.”

He further stated that Jose Foundation will create and bring awareness to the grassroots of every community in Nigeria and share the recommendations for practice around the world to curb child sexual exploitation.

“We will not stop until CSE is completely wiped out and children are safe to live a better life even if we have to stand alone on this mission,” Abhulimhen said.

Meanwhile, Jose Foundation in collaboration with the Federal Ministry of Women Affairs and Social Development has concluded plans to hold the first workshop on child sexual abuse holding in Abuja between June 18-21 where stakeholders will be trained on how to deal with CSE and providing solutions to ending the menace.

In order to stem the menace of child abuse, the organisation launched an App ‘Stop CSE’ in 2017 to report abuses by victims on Android devices available on Google Play in collaboration with its United Kingdom partners.

The foundation believes that the use of the App has become necessarily to overcome the culture of silence and shame that is taken away attention from the heinous crime against innocent children, some of which are victims of their parents, relatives, religious leaders and others.

According to the organisation, children and parents can download and use it as a weapon of defence and seeking justice for any sexual exploitation by simply reporting the matter through the App to the Foundation and ‘the Police and other relevant authority will be informed’.

It also campaigned against child labour and sexual exploitation by visiting one of the most vulnerable people’s settlement in Abuja- the Internally Displaced Persons (IDPs) settlement to remind all in Nigeria to focus attention on the global extent of child labour and the action and efforts needed to eliminate it.

More so, to tackle the lingering cases of child sexual exploitation in Nigeria, the group has engaged British expert councillor, Jayne Senior (Member of British Empire) on a working agreement to help address the menace in the country.

Mrs Senior who is reputed for being the first to expose the child sexual abuse scandal in Rotherdam, UK is being planned to train teachers, children, stakeholders and parents in Abuja and to spread to schools across the country.

“The objective of the workshop is to train all stakeholders in child development including Policymakers, Ministers and Legislators, Parents, Teachers, Social Workers, Caregivers, Religious Bodies, Security Agents, Children NGOs, CSOs and others on how to identify CSE and curb the menace of child sexual abuse and finding justice for victims using the instruments of Nigeria’s laws and helping victims to recover,” the group said.

It further stated that experts from Nigeria, United Kingdom and the United States will deliver lectures on the various aspects of child sexual abuse and how Nigeria can curb the menace.

Adding that the workshop has been endorsed by the federal government and is expected to have top functionaries in attendance including the First Lady of Nigeria and wives of all the 36 states governors and the minister of FCT.

“We will launch a book on CSE and set up a Therapy Centre in collaboration with our UK experts,” the group added.