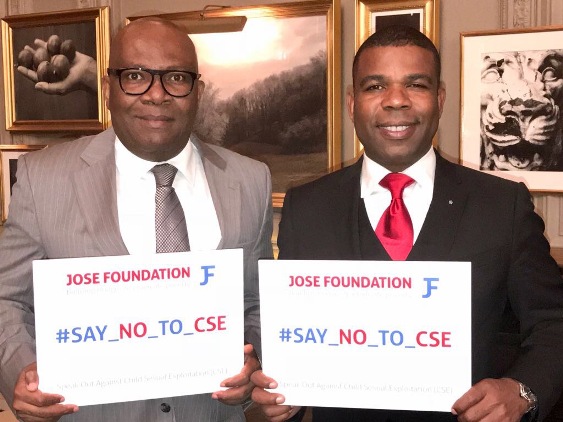 A Nigerian international non governmental organisation, Jose Foundation has commenced a global campaign against child sexual exploitation tagged #SAY_NO_TO_CSE to further deepen the awareness ahead of its planned workshop on tackling the menace in Abuja, Nigeria.

In a press statement to LEADERSHIP, the Foundation president, Prince Martins Abhulimhen, stated that the new campaign has become imperative in view of the changing trend of information dissemination, hence the need to be on the same page with the communication pattern.

The new strategy is to further send the message to all corners of the world that taking advantage of children by sexually exploiting them is evil and is destroying the future of the millions of children trapped in that circle.

He said Jose Foundation will not rest until the act and the culture of silence is put to an end and offenders punished according to the laws of countries involved.

“As we begin our global campaign to speak out against Child Sexual Exploitation (CSE) awareness, we challenge you to take up our campaign logo, take a picture and send to our mail: info@josefoundation.org just like Ambassador Jean Pillard, former Haiti envoy to UK did, for our first CSE workshop coming up in Abuja Nigeria. It is our collective responsibility to stamp out CSE in our society”, he said.

The foundation have in the past presented to the public a book on child sexual exploitation (CSE) and understanding the consequences drawing from the Rotherham experience.

The book titled Child Sexual Exploitation After Rotherham, Understanding the Consequences and Recommendations for Practice, was launched in London.

The book was written to address the issues of child sexual exploitation (CSE) that has gained ground in several countries of the world using the experiences of fighting the menace in Rotherham, United Kingdom.

It also launched an App ‘Stop CSE’ to report abuses by victims on Android devices available on Google Play Store and Apple IOS to act a whistle blowing device to victims of CSE.

The Foundation believes the App has become necessarily to overcome the culture of silence and shame that is taken away attention from the heinous crime against innocent children, some of which are victims of their parents, relatives, religious leaders and others.

Abhulimhen also said the Foundation is planning to set up a Therapy Centre in Abuja after its training seminar to care for victims of child sexual exploitation in partnership with its UK experts.

Already, the organisation said it is preparing the detail programme of event of the planned seminar/workshop as requested by the federal ministry of Women Affairs and Social Development.

The five-day workshop is being planned to train teachers, children, stakeholders and parents in Abuja and to spread to schools across the country.
Also parents of the children abused in Rotherham, UK, will be part of the programme in Nigeria and will be working closely with experts to share their experiences to help children, families and communities across the country.