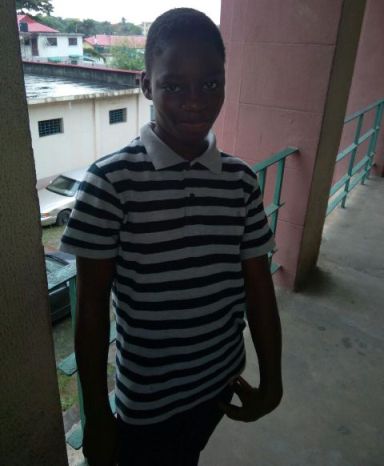 RUKAYAT OLAJOBI an orphan only 12years old has just suffered sexual and emotional abuse at the hand of Mr Abimbola Salami a married man whom she trusted.

She suffered various forms of groping, touching, verbal and sexual abuse for over 2years, she has been living in fear to speak out about it and she did not know how the society will judge or treat her base on her homelessness and poverty.

On this faithful day Feb 6, 2016, Mrs Salami caught her husband Mr Abimbola Salami sexually abusing this orphan Rukayat Olajobi, she got into a big fight with her husband and neighbours intervene on the matter.

When Mrs Adeola Olushola who arrive at the scene was called at the market that an Alfa ( Abimbola Salami) who is a petty trader in Pedro Gbagada Lagos state had raped and disvirgin a helpless minor named Rukayat Olajobi who was only 12years old.

Mrs Adeola Olushola quickly went to Pedro Police station after the horrible and disheartening news broke. Upon arrival she was directed to the human rights office desk at the police station. Where she was told to go and do a test for the alleged minor at Marabel centre at Ikeja Lagos and she was tested positive that she has been defiled.

The case was later transferred to Panti state CID of the NIGERIAN Police on the 11/2/16 and Mrs Adeola Olushola was instructed to write a statement and the case taken to court.

Some unsatisfied market women contacted TVC station due to unfair judgement, when they realized the suspect was released on bail around March 2016 to be precise.

Mrs Adeola Olushola went back to the police station and contacted the IPO (Moji Sola) in charge of the case in April. According to her she the IPO(Moji Sola) was a bit rude and insensitive towards the issue, telling them to go the magistrate court  and contact inspector Rita where the case has been transferred, when she realized the TVC crew was present. Inspector Rita then explained to the entire crew that the suspect was released on bail and hearing was on the 23/5/16.

The case was later adjourned to the 04/07/16, at Sabo Yaba Magistrate Court. However, the magistrate was waiting for DPP advice so it could be transferred to the high court.

Presently Rukayat Olajobi is  at WAPA which is a state government organization to help youths, she is presently not in school till the next session which is in September.

The case against Mr Abimbola Salami (the rapist) of teenager Rukayat Olajobi and rape of young girls in general should not only call for total examination of our collective moral conscience but also the manifestation and disposition of such demonic evil act in our society.

We are quick at invoking the name of God especially at times of need but will remain silent and timid or condone and accept actions of sick men parading around as married men, Clergy, some call themselves men of God and Political leaders. In civilized society, that rapist would have gone to jail for life.

The legal system not coming out strong against this rapist is tantamount to aiding and abeiting.

The entire World need to come to the aid of this child. Her life has experienced hardship beyond words can express, losing both parents at such an early age completely exposed her to this vulture who took advantage of her vulnerability.

Jose Foundation will set up Medical, scholarship and Rehabilitation accounts on her behalf to address these traumatic events.

The Foundation will also aggressively pursue justice in this case and make sure that Mr Abimbola Salami responsible for this crime faces the full weight of the law.

Support Jose Foundation Org and our campaign work on child sexual exploitation to help transform the lives of vulnerable children and young people across Nigeria.