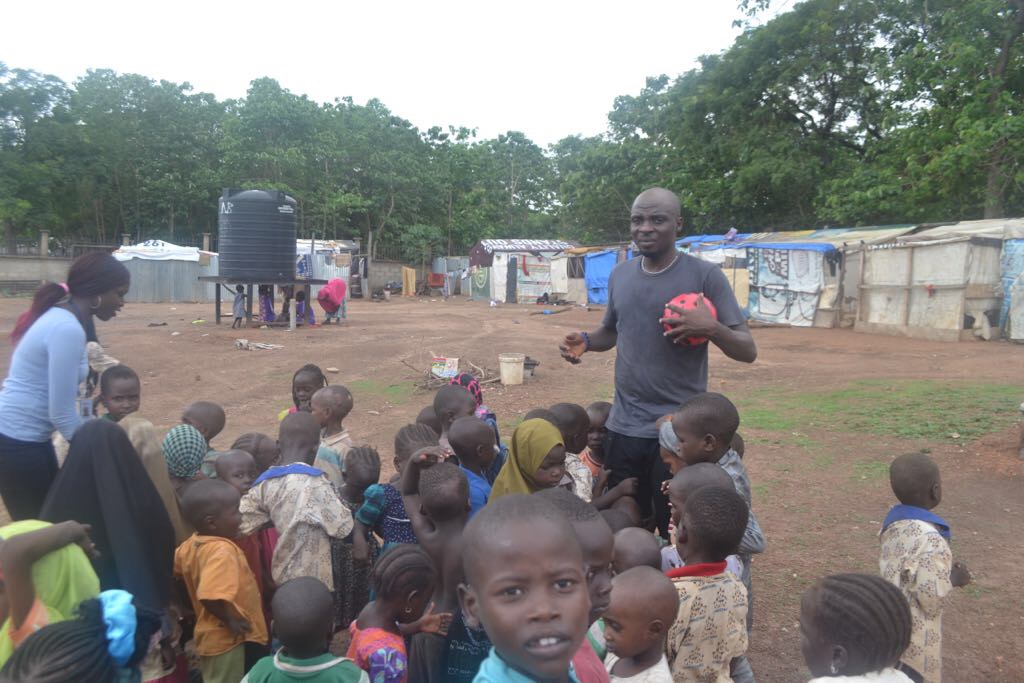 Ahead of 2017 World Day Against Child Labour on June 12, an international nongovernmental organisation, Jose Foundation took its ongoing campaign against child labour and child sexual exploitation to one of the most vulnerable peoples settlement in Abuja, the Internally Displaced Persons (IDPs) settlement located in Durumi near the city centre.

May 19, 2017 was a memorable day for the IDPs especially children living in the settlement when Jose Foundation extended its long campaign for a better life for the Nigerian children.

The team of humanitarians led by the Campaign and Programmes Director, Jose Foundation, Mr Gregory Okonofua was to remind all in Nigeria to focus attention on the global extent of child labour, sex abuse and the action and efforts needed to eliminate it.

It is also to remind people from around the world to highlight the plight of child labourers, children exposed to sexual abuses and what can be done to help them integrate back to the society while urging governments to apply the relevant sections of the laws to deter offenders.

Jose Foundation has over a decade sustained a campaign against child sexual exploitation and abuses in Nigeria, urging all stakeholders to step up action to curb the rising wave of rape and exploitation of minors.

It has over the years identified primitive actions rooted in cultural, religious and fetish beliefs as some of the causes of rape of minors. The Foundation believes that the scourge has taken a dangerous dimension today, with IDPs exploited because of their difficult situation created by insurgency and poverty.

Speaking to LEADERSHIP Sunday after the visit, Team leader, Gregory Okonofua said the trip to the IDPs settlement has reinforced the need to further protect children across Nigeria by improving their standard of living.

“The visit was an eye opener to the real issues faced by children and adults at the camp. The standard of living was low as most of the IDPs were without occupation and a means of sustainable livelihood which is an indicator that Nigeria as a country is still far off the mark in achieving SDG 8 which seeks to ‘promote sustained, inclusive and sustainable economic growth, full and productive employment and decent work for all’.

“The IDPs lived in tents made from sacks and with the rainy season approaching, the consequences could be catastrophic. Access to the camp was porous as there was no known security mounting guard at the gate”, he said.

Jose Foundation donated several relief items to the children and parents on the camp much to the elation of the beneficiaries.  However, the situation at the IDP settlement highlighted the need for all hands to be on deck to support the welfare and wellbeing of those living in settlement because “turning a deaf ear to the needs of these vulnerable people would do more harm to our society than good”, Oknofua added.

He stressed that to achieve a society that is inclusive, safe, resilient and sustainable, “then we as a people need to take ownership and collaborate to ensure that we can together achieve the SDGs and also offer a better standard of living to IDPs in our nation”.

This visit is in line with the foundation’s vision of a world free of poverty and exploitation. It also served as a fact finding mission in preparation for the Child Sexual Exploitation workshop to be hosted by the Foundation in August.

It will be recalled that the Internal Displacement Monitoring Centre (IDMC) estimates that there are almost 2,152,000 internally displaced people in Nigeria as of December 2015. The numbers have grown exponential over the last two years with the surge in insurgencies.

In Abuja, the Federal Capital Territory alone, the figure was put at 13,481. Of the total figure of IDPs, the assessment indicates that 12.6 percent were displaced due to communal clashes, 2.4 percent by natural disasters and 85 percent as a result of insurgency attacks by terrorists.

In its strive to achieve the SDG 3 of ensuring healthy lives and promote well-being for all at all ages, Jose Foundation said it embark on the visit to share relief items with the IDPs and also conduct a needs assessment on the standard of living of persons in the camps, their safety measures and child protection monitoring access.

Meanwhile, President of Jose Foundation, Prince Martins Abhulimhen, has said that the planned workshop on child sexual exploitation is getting more support from concerned Nigerians who have so far declared support to fighting child sexual abuse.

He said the Foundation has submitted details of the programme to the ministry of Women Affairs and Social Development through the Nigerian High Commission in London, United Kingdom.

He added that experts on fighting child sexual exploitation from the UK will be in Nigeria to provided awareness and share the experience of that country.

The training according to Abhulimhen, will involve all relevant stakeholders including legislators, ministers, security agents, and heads of schools, parents, IDP camp managers and also heads of orphanages.

According to him, the foundation is launching an awareness book during the workshop to be distributed in schools and other care centres across Nigeria. Also in collaboration with the UK experts on Child Sexual Exploitation, planned to set up a Therapy Centre in Abuja to care for victims of CSE.

He called on all Nigerians to show support and declare war on child labour and child sexual exploitation in Nigeria.