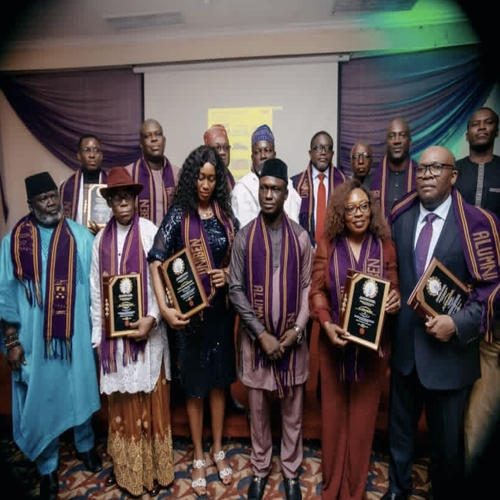 The University of Benin Alumni Association (UBAA) Lagos Branch, has honoured philanthropist and child rights activist, Dr Martins Abhulimhen, with an Award of Excellence in recognition of his philanthropy and advocacy on gender based violence (GBV) all over the world

At a ceremony in Lagos, Dr Abhulimhen who is the president of Jose Foundation U.K. was awarded the coveted 2020 UniBen Alumni Award of Excellence for his compassion and care for the vulnerable in Nigeria and the rest of the world.

Speaking on the occasion, the chairman, UBAA, Pharm Stephen Onojomete, said Dr Abhulimhen has continue to build bridges since 2003 when he founded Jose Foundation, between the rich and the poor of Nigeria and Africa.

“The generosity of the Jose Foundation supports innovative, impactful and lasting initiatives in low-income countries that promote women’s economic and social development.

“The enterprise provides access to essential services to encourage responsible management of diminishing natural resources; to deliver humanitarian assistance to children and their families in the aftermath of natural disasters,” Onojomete said.

The Alumni commended Jose Foundation for raising awareness in the sports and movie industries after reports of sexual exploitation; taking its campaign also to managers of sports team.

In parallel, the Alunmi lauded the Foundation for launching a global awareness campaign to draw attention to the growing evidence of child sexual abuse.

Receiving the award, Dr Abhulimhen applauded UBAA for honouring him; he said the award will spur him into working hard for the sake of humanity and social justice for all.

He lamented that gender based violence is on the raise in Africa and the culture of silence must be discouraged to put a stop to all forms of sexual exploitation.

“To represent Uniben as an ambassador is one of the greatest awards I have received in recent time and it will spur me to do more for humanity and continue to raise awareness to end gender based violence,” he said.

He stressed that Jose Foundation will continue to be at the forefront of the campaign against GBV while calling on state actors to enact laws with stiffer penalty for rape and other gender based violence against the vulnerable in the society.