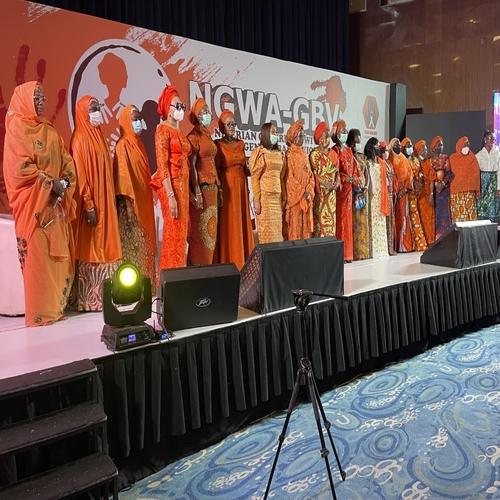 Stakeholders converged on Abuja last week to formulate an action plan against the rising cases of rape, violence against women and other minors. Not a few suggested a stiffer punishment for offenders in order to deter further acts against the safety of women and other vulnerable members of the society. Yemisi Okunlola writes

As the remains of Vera Uwaila Omozuwa, 22 and former student of the University of Benin was buried recently at the Third Cemetery in Benin City, Edo State, stiffer and stringent punishment for all forms of sexual violence in Nigeria has been advocated by rights activists with the states taking the lead.

Rape and all forms of sexual molestations and even murder are gradually becoming a way of life in Nigeria with barely any day passes without one reported case of rape of women, the girl child and even boys.
Like a wind, it passes until the next story breaks, a development which has gotten stakeholders worried that the nation is failing in its ability to protect and guarantee the rights and safety of women and children who form the bulk of the most vulnerable in the society.

Miffed by the rape and murder of Omozuwa in a church in Benin City, an international non-governmental organisation, Jose Foundation, has proposed a 21-year jail term for rape offenders and other forms of violence against women and children in Edo State. This is contained in a new bill she is sponsoring even as some stakeholders are suggesting stiffer punishment like the law passed by the Kaduna State House of Assembly of castration for rape offenders.

Stigma often prevents victims from reporting incidents of rape in Nigeria and has according to experts; fuelled the spike in sexual violence across the country.

As at today, reported rape cases has assumed a dangerous dimension with no day passing by without one or two cases reported in the media.

Since 2015, when a new law was introduced, only about 40 rape suspects have been charged, in a country of over 200 million people, according to the National Agency for the Prohibition of Trafficking in Persons (NAPTIP), which has a sex offenders’ list on its website.

Findings show that the new law broadened the scope under which sexual offences can be penalised in Nigeria and removed the time limit of two months during which rape cases were tried before they became eligible to be heard in a court.

In proffering solution to the protracted sexual abuse of women and minors in the country, Jose Foundation at a press conference recently held in Lagos reminded Nigerians that the war against rape is one that must be won to guarantee the safety of millions of women in Nigeria.

The president of Jose Foundation, Dr Martins Abhulimhen, said the brutality meted out on late Miss Uwaila Omozuwa, was the height of man’s inhumanity and that it cannot be left unpunished.

He said the foundation had taken it upon itself to seek justice not only for the family of Omozuwa but for victims of sexual abuse across the state.

Recall that the late Uwaila, who was 22-year-old aat the time of her death, was gang-raped, inflicted with head injuries and abandoned for dead inside a church in the state.

She died three days after the attack at the University of Benin Teaching Hospital from injuries sustained during the attack on her.

“We are pained at the brutality meted out on the young university student leading to her death; hence, we are not taking it lightly in getting the Edo State House of Assembly to pass a bill which we would be tagged “Uwa’s Law” with a stiffer punishment for rape offenders.

“There is every need for us to collectively raise the bar of punishment for this callous act. We are proposing in the bill a minimum of 21 years prison sentence without a fine option for any rape offender and when such cases lead to the death of the victim, the maximum sentence for murder should be applied,” Abhulimhen said.

He also stated that the Jose Foundation was setting up a trust fund in the late Uwaila’s name to fight for justice and to restore victims of rape and other sexual violence to normal life.

Abhulimhen stressed that the trust fund, when set up, will be headed by the parents of the late Uwaila with spiritual support from the church which late Uwaila attended.

Speaking to LEADERSHIP Sunday on the development, Fatima Ishiaku, a Gender Rights activist who was sexually abused and molested before the age of seven till she was 14 years old by someone she regarded as a father, said any state that does not have stiff penalty for rape is supporting the act.

She is of the position that by speaking out, healing comes to victims of sexual violence.

Ishiaku who runs an NGO called House of Fatima, which caters for and protects the rights of abused children, says life imprisonment is the least a rape offender should get in Nigeria and that rape has nothing to do with indecent dressing by women and girls as being advanced by some groups as reasons for the spike in rape.

“The police should stop putting blame on the victims, and that by their refusal to give victims police reports in time for them to quickly visit general hospitals for test is not helping victims because it leads to demoralisation and delay for justice for victims,” she said.

Having risen above the trauma and psychological breakdown, Ishiaku told LEADERSHIP Sunday that she is speaking up to help victims like her break their silence and also to let the world know what sexually abused children go through mostly in Nigeria. How parents can identify the signs, guard against rape and protect their kids from sexual predators.

Recently, the federal government took a step at nipping in the bud the protracted cases of gender based violence in the country with the launch of a Gender Based Violence (GBV) situation room and data dashboard to help curb the menace of all forms of GBV.

The ministry of Women Affairs and Social Development in collaboration with EU-UN joint spotlight initiative launched the National Gender Based Violence (GBV) Situation Room and data dashboard in Nigeria to fight against all forms of GBV.

This is one of the many steps taken by the minister of Women Affairs, Dame Pauline Tallen to curb sexual violence especially the menace of rape.

Recall that in 2019, the ministry launched a Sexual Offender’s Register, to tackle issues of rape in Nigeria saying that over two million Nigerian women and girls are raped annually.

Nigeria governors’ wives have not been left out in the fight against GBV. The first ladies converged on Abuja last week for a two-day conference under the auspices of the Nigeria Governors Wives Against Gender Based Violence (NGWA-GBV), UN/Spotlight Initiative and the Nigeria Governors’ Forum (NGF) to formulate an action plan in tackling cases of sexual violence across the country.

The first lady of Nigeria, Mrs Aisha Buhari represented by the minister of Women Affairs and Social Development, Dame Pauline Tallen, commended the state governors for declaring a state of emergency against GBV in June.

She noted that the experiences had shown that any meaningful intervention in addressing national politics must take into account GVB.

The first lady raised the concern of funding and harmonisation of existing laws to incorporate emerging issues as they reflect in different states.

Mrs Buhari commended the wives of the governors for the priority and attention given to fighting against GBV, especially in the wake of the COVID-19 pandemic in Nigeria.

Worried by the negative impact of the COVID-19 lockdown in Nigeria, the wife of the Ekiti State governor and Chairperson of NGWA-GBV, Mrs Erelu Bisi Fayemi said in recent times, there had been astronomical increase in cases of gender based violence in Nigeria.

The United Nations is also worried by the ugly development in Nigeria, the UN Resident Coordinator to Nigeria, Edward Kallon, while speaking on GBV condemned the rising cases of rape and other forms of violence against women.

“It is just not acceptable anymore that we have to sit down and see the level of violence that is perpetrated against our womenfolk. This is not acceptable,” he said.

“It is a whole of society call and if we come together, we can stop this.”