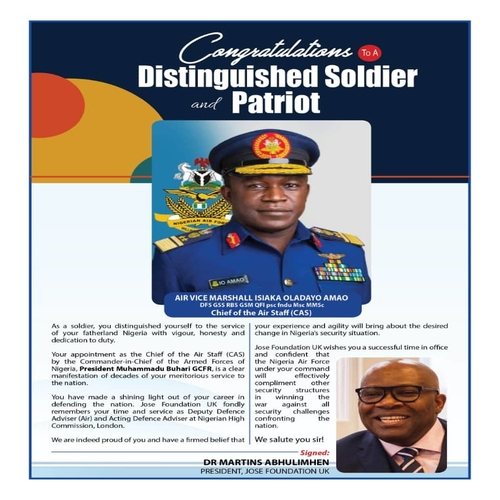 Jose Foundation, UK, an international non-governmental organisation fighting for the rights of children, women and the vulnerable, has congratulated the newly appointed chief of the air staff, Air Vice Marshall Isiaka Oladayo Amao, saying the air chief is a distinguished soldier and patriot.

A congratulatory message entitled “Congratulations To A Distinguished Soldier And Patriot” and signed by the president, Jose Foundation UK, Dr Martins Abhulimhen, described Amao’s appointment by President Muhammadu Buhari as a recognition of his decades of meritorious service to Nigeria.

“Your appointment as the chief of the air staff (CAS) by the Commander-in-Chief of the Armed Forces of Nigeria, President Muhammadu Buhari, GCFR, is a clear manifestation of decades of your meritorious service to the nation.

“You have made a shining light out of your career in defending the nation. Jose Foundation, UK, fondly remembers your time and service as Deputy Defence Adviser (Air) and Acting Defence Adviser at the Nigerian High Commission, London,” he said.

Abhulimhen expressed delight at the development in the military career of the new CAS, saying the Jose Foundation is “indeed proud of you and has a firm belief that your experience and agility will bring about the desired change in Nigeria’s security situation”.

According to him, the Jose Foundation UK wishes the new Air Force boss a successful time in office and expresses confidence that the Nigeria Air Force under his command will effectively complement other security structures towards winning the war against all security challenges confronting the nation.